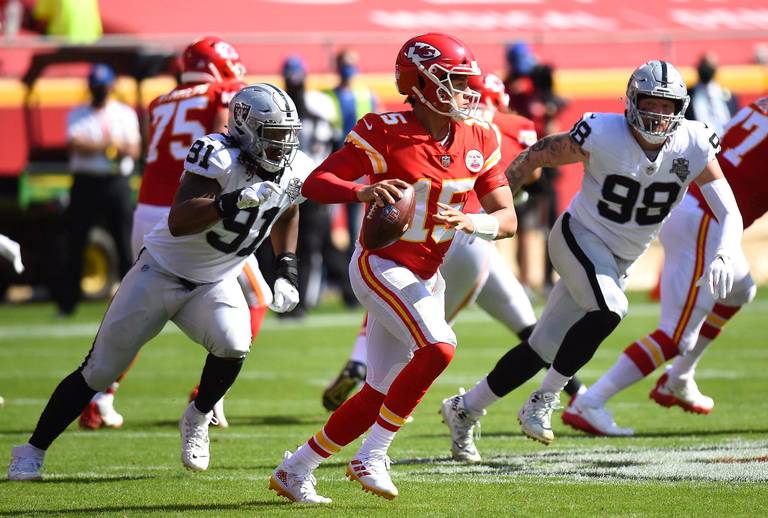 The early game in week five of the NFL season presented a quality divisional matchup. The Kansas City Chiefs took on the Las Vegas Raiders on what was set to be the second divisional game for the Chiefs and the first for the Raiders.

The Chiefs opened up the game as 11 point favorites to a Raiders team that was coming off of two straight losses. Even though the Raiders struck first, the Chiefs unsurprisingly went up 14-3 in what was quickly turning into another Chiefs blowout. The Raiders then answered with a 59 yard strike from Derek Carr to Nelson Agholor. As it already started turning into a back and fourth game, the Chiefs struck again, 2 minutes later to take a 21-10 lead. On the very next Raiders possession, Darren Waller caught a lobbed spiral pass from Carr to make it a 21-17 game. This game then started to get a whole lot more interesting. After the Chiefs were forced to punt, Henry Ruggs caught a spectacular 72 yard touchdown pass just three plays later. The Raiders now had a 3 point lead that would become tied at halftime after Patrick Mahomes worked the 2 minute drill and drove his team down to kick a tying field goal just before halftime. After what we all witnessed the first half, many of us thought it would be another second half shootout, but it was the complete opposite.

Dak suffers gruesome leg injury
Jets have released Le’Veon Bell
Would you like to get Notifications for new articles? OK No thanks