How COVID-19 is Bringing Opportunity to NBA G-League Players 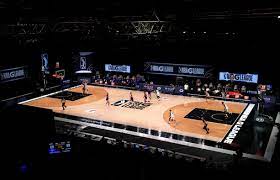 With the recent spike in Covid from the Omicron variant, countless NBA players are being sent into the NBA’s health and safety protocols. As a result, the league revised the rules for signing replacement players from free agency or the NBA G-League. Even though the spike is bad news, members of the G-League are getting opportunities that they may not have gotten back when times were normal.

What is the G-League

The NBA G-League has been around for a while but has had different names in the past. In 2001 NBA created the National Basketball Development League (NBDL). It was available as an option for players not yet ready for the NBA to play the game they love and develop their game. The NBDL and the NBA work together, allowing NBA teams to call up players in the NBDL and giving them chances to play on the big stage and prove that they are worthy of a spot on an NBA roster. In 2005 the NBDL became the NBA D-League (NBA Development League), and in 2017, Gatorade struck a deal with the NBA, becoming the title sponsor of the D-League. From there, the D-League became the G-League.

Just three weeks after the Omicron variant of Covid-19 was identified, players all over the league started getting placed into the NBA’s health and safety protocols. This means any player (vaccinated or not) exposed to the virus cannot engage in any team activities until they provide at least two negative tests. As of yesterday, it was reported that almost 100 players are in health and safety protocols. Some teams are hit harder than others losing more than half of their team in one day. Yesterday Shams Charania, an NBA Analyst for The Athletic, broke the news that the NBA updated its rules regarding player signings. The rule states that NBA teams must sign one replacement player if two players test positive. If three players test positive teams must sign two replacement players, and if four or more players test positive, three replacement players must be signed. Teams have the option to sign free agents or players from the G-League.

With the high amount of players sent to health and safety protocols, NBA teams are finding replacements left and right. NBA All-Star, Isaiah Thomas, signed a deal with the Grand Rapids Gold on December 13th of this year. After putting up an impressive 42 points, eight assists and six rebounds in his first game with the Gold, he was immediately signed by the Los Angeles Lakers. In his first game back as a Laker he led in scoring with 19 points along with two rebounds and a single assist. Now, G-League players continue to get signed by NBA teams to fill up roster spots. This is interesting because G-Leauge players don’t usually get called up at this rate. While the spike in Covid cases is a step backwards, some players who may not have otherwise been recognized will get their chance to show what they can do on the next level.

Mid-Range Bombing!
Way Too Early 2021 NBA Re-Draft
Would you like to get Notifications for new articles?    OK No thanks